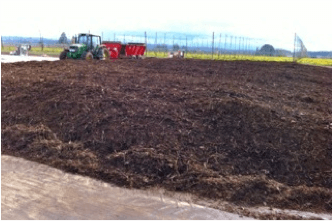 Near the center of the Willamette Valley in Oregon most of the specialty hops for micro-breweries are grown. One of the most respected hop growers in the area is John Annen of Annen Brothers Farm. Hop producers generally have their own processing factories close to the fields to strip, separate, dry and bale the fragrant hop flowers from the vines and leaves immediately after cutting.

Over 6,500 cubic yards are handled within the short 30 day harvest time. In the past, hop growers would cart the waste vines and leaves to a vacant field and let them sit and decompose naturally in a very large pile, the light porous material would take one to two years to break down, allowing rainwater to filter through, that if near a stream or over a sensitive water table, could cause water contamination. 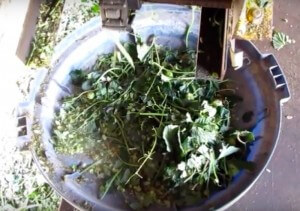 The National Resource Conservation Service (NRCS) encouraged Annen Brothers to relocate their waste piles and begin to manage them as resources to reduce impacts on the farm’s watershed. Annen Brothers teamed up with their local irrigation system contractor Stettler Supply in Salem Oregon and they looked for a composting system that used the smallest area possible, had the capacity to hold large volumes and allowed their trucks to dump and run back for another load as quickly as possible, as well as eliminate the impacts to the watershed.

Stettler and Annen looked to GMT for doing simple aerated static piles, however after seeing our GMT TAP (Turned Aerated Pile) System technology, they realized they could do it all on a 300 by 120 foot area, and fit it right next to their processing factory, almost eliminating their travel time.

The GMT TAP places all aeration pipes below a concrete pad keeping the nozzles at the surface clean using high velocity air flow. Annen Brothers drives their trucks, loader and mixer anywhere on the pad scraping and pushing the pile into a solid bed of compost, without having to leave any alley ways.

Air is blown up and through the piled hop waste. Temperature probes control the speed of the three large blowers. It is simple clean and easy to manage.

Pipes are easy to flush clean and the pad as well, allowing Annen’s outdoor facility to clean up after composting the harvest waste, with clean up water going to storage tanks for irrigation.

The winter rains run clean once again off the pad. The finished compost is stored in a 60 by 120 foot metal building to be used in the spring.