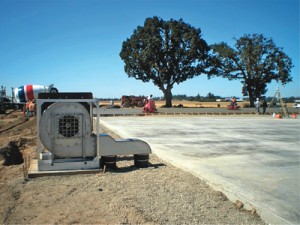 Mount Angel is in the Willamette Valley in Oregon, where much of the specialty hops for microbreweries are grown. Hop producers generally have their own processing operations close to the fields to strip, separate, dry and bale the hop flowers (also referred to as cones) from the vines and leaves immediately after cutting. “Hops grow in giant vines that can be 18-feet long,” says John Annen of Annen Farms, a third generation hop farm near Mount Angel. “Only the hop cones go to the brewery. The plants are grown on trellises. They are cut down and the cones are stripped off. The harvest lasts for about 30 days.” Because of the concentrated time frame, hop farmers tend to stockpile the plant waste on an unused field during the harvest and let it decompose on its own. Annen would try to grind the vines and leaves and spread them back on the hop fields. “That doesn’t work well anymore as we grow so many different varieties of hops for the microbreweries, and some hops still have viable weed seeds when the plant waste is spread,” he explains. “We can’t run the risk of mixing the seeds.” Another concern was related to potential ground water contamination from the stockpiled green waste.Annen Farms, in Mount Angel, Oregon, uses Green Mountain Technologies’ Earth Pad/TAP technology.

To address the situation, Annen Brothers, teamed up with Stettler Supply, its local irrigation system contractor, and they looked for a composting system that needed the smallest land area possible, had the capacity to hold large volumes and allowed their trucks to dump and run back for another load as quickly as possible. “Originally we were looking at composting in windrows and turning the piles, but that ended up requiring a huge land area,” says Annen. “And we get 35 to 40 inches of rain per year, so we would have needed cement on the floor and a building or cover over it. We estimated it would have to be 5 acres, and we couldn’t afford that.”

Annen Farms learned about the Earth Pad/TAP technology sold by Green Mountain Technologies, which suggested a 120-foot by 300-foot sized aerated pad. It could be located adjacent to its processing facility, almost eliminating travel time. The design involved turning the compost by loader and manure spreader twice, and watering as needed to keep the piles biologically active. Aeration pipes are under the cement slab; a small riser comes to the surface every 5 feet to aerate the solid bed of hop waste stacked 7 to 9 feet tall. “The goal is to complete the composting process in 6 weeks,” says Annen. “We can have it made and back on the fields ideally before fall rains come. We loaded the composting pad for the first time on October 1st last fall, and had the most beautiful compost by November 15.” Vinyl covers made from recycled billboards are being used to keep the product dry until the spring. A metal 3-sided building (60 foot by 120 foot) is scheduled to be erected on the far end of the Earth Pad/TAP to store the compost. [BioCycle]