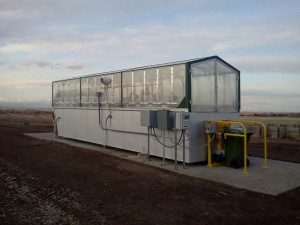 After many years of trucking the University’s food and landscape waste 50 miles one-way to an off-site commercial composting operation, Colorado State University (CSU) decided it was time to look into alternatives. The significant transport and disposal costs motivated them to consider an on-site solution. They also wished to utilize the valuable nutrients in waste for on-campus landscaping applications. CSU approached Green Mountain Technologies (GMT) to provide a commercial composting solution that met their specific needs.

GMT provided CSU with a fully enclosed, Earth Flow In-Vessel composting system three miles west of the main campus at the Foothills Campus. This 30’ long Earth Flow is capable of composting more than one ton of biodegradables per day. The system hastens the process of aerobic decomposition and is able to compost food scraps in 14-21 days. The composter is the size of a large, roll-off dumpster with a greenhouse roof for passive solar gain and a unique traveling auger design which simultaneously mixes the compost and transports it slowly from one end of the vessel to the other. The composter is powered with electricity generated by nearby solar panels.

Pulped food waste (including meat, dairy, bones and paper products) from two dining centers is composted in the Earth Flow along with bulking material generated from the CSU Equine Center. Waste is loaded into one end of the vessel by placing a rolling toter on an automated tote loader. The control panel allows the operator to select the number of times per day that the compost is mixed as well as automatically adds moisture to the compost.  On a recent day, the heat off the pile was recorded at 130°F.

Finished compost cures outside of the system in piles for several weeks before being used as a soil amendment on campus. CSU’s Sustainability Coordinator Amber Smith stated, “The Earth Flow system is a sophisticated and effective system for composting larger quantities of material, which works well for our university. We have also appreciated the strong customer support and service provided by Green Mountain Technologies as the university has implemented this new system.”

The Earth Flow system significantly reduces CSU’s transport and disposal costs and allows CSU to keep valuable nutrients on-campus for landscaping projects.  In addition, the completely enclosed, in-vessel design of the Earth Flow prevents offensive odors and pests. And the Earth Flow does its job on a footprint roughly the size of a single parking space.