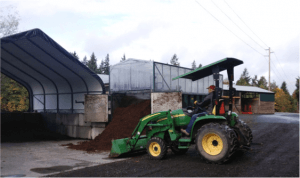 IOS Ranch is a is a sustainably designed 8-acre private farm on Bainbridge Island, WA owned by Philippe and Juliet Le Dorze. With an average of 15-20 horses on site, the facility produces 2-4 cubic yards of waste per day. As Bainbridge Island loses its farmland to development, Philippe’s agreement with a local farmer to take the stable waste becomes tenuous. Philippe also realized that increased regulation of the waste disposal could end the agreement at any time and was placing restraints on what he could do to store and dispose of the waste. For these reasons, IOS Ranch decided to pursue on-site solution to deal with their waste. It was imperative that the solution would not increase staff labor.

Due to the small footprint, containment of material and odor, and end product of an In-Vessel GMT Earth Flow 22, it was an easy decision for Philippe to purchase one for IOS Ranch, which now composts all of their stable waste on site creating a zero waste scenario. Philippe uses composted material as soil amendment on his jumping field, pastures and hay fields and sells the remaining amount for a price that is higher than his per yard shavings purchase cost. The Earth Flow system also gives him the option of reclaiming and reusing bedding material.

The efficiency of the loading process for the Earth Flow proved to be an excellent time management choice. Taking a small amount of time daily to move the material out of the retention bin ultimately saved considerable time when eliminating the need to load and haul off the material to local farmers, something that could take days when the bin was full and was necessary every 2-3 weeks. With the Earth Flow, the stall waste could be loaded daily and the composted material could be stored in the exit bin and be moved to the fields as needed. With the retention bin less than 50’ from the vessel the load time is less than 20 minutes. To assist the loading process, the control panel is set to “load” and runs for a set amount of time to assist in pulling the material back into the vessel. The operator then can turn the panel back to mix and the system will run on its automated schedule.

Once in the Earth Flow, the material takes 10-14 days to move through the vessel. During this time the temperature of the material rises to well above the level necessary to destroy most weed seeds and to destroy any harmful pathogens. Throughout the three-month trial period, samples were taken and sent to both Udder Health and Soiltest Laboratories for testing. All tests fell well within acceptable limitations.

Once Philippe saw the by-product of the composting system he was thrilled with the potential it had for use in his hay fields and grass jumping arena and as a valuable compost to sell. He is very passionate about his jumping field and has studied best practices extensively. The compost from the stable waste is just what he is looking for as a soil amendment. What he doesn’t use he will sell to the local landscaping market with landscapers asking to be on his list. The price he is able to get for the compost is more per yard than what he pays for his clean shavings.

As Philippe says, “It is hard to argue with the numbers. Do the math! This process is better environmentally and it is better economically.”

The GMT Earth Flow met the needs of IOS Ranch by offering an in-vessel system that confined material and controlled odor, possessed a small footprint, offered ease and efficiency of operation with low operating cost. Philippe believes that the Earth Flow “doesn’t add any extra labor and is certainly easier than finding a place for raw manure. It renders the manure non- toxic so it can be used anywhere and not be a danger to the environment, especially water run-off.”