In 2008, Joint Base Lewis-McChord working with the NDCEE installed an Aerated Static Pile (ASP) system utilizing Green Mountain Technologies’ Windrow Manager software and wireless probe technology at Fort Lewis which has a population of over 50,000 people.

The NDCEE was established to help Department of Defense installations, ranges, weapon systems, and the warfighter achieve performance advantages, enhance efficiency and cost effectiveness, and comply with regulations. Their mission is to transition technology solutions in support of the DoD as it strives to maintain readiness, meet sustainability goals, and support warfighters at home and abroad.

Compost Monitoring
The goal of the NDCEE Commercialization of Technologies to Lower Defense Costs Task is to lower technology acquisition costs to the DoD by helping to build a competitive, innovative supplier base. Through this task, the NDCEE has facilitated the introduction of new products, processes, and services into DoD acquisition programs. Technology examples include a perchlorate sensor, cost-effective daylighting, and biodegradable plastics for shipboard use. Because composting is becoming a common DoD practice, the NDCEE also evaluated technologies that monitor the composting process.

Technology Description
Compost monitoring technologies monitor, test, and characterize key operating parameters (e.g., temperatures, moisture, and oxygen levels), thereby, allowing personnel to ensure that proper decomposition of organic solids occurs per EPA’s 503 Processes to Further Reduce Pathogens (PFRP) requirements. New technology is available that provides more precision to the process rather than relying on qualitative factors such as the sense of touch and smell. The instruments also can download data automatically, eliminating the need for writing and data entry by personnel.

To address the need to accurately and consistently monitor compost, the NDCEE demonstrated and validated several monitoring technologies at Fort Hood and Fort Lewis. Both installations have active plans to expand composting efforts and offered two different test settings. The Fort Hood compost is aerated by a windrow turner and rewetted. The Fort Lewis compost is a static pile on top of vented tubes; a fan blows air through the tubes to aerate the compost pile. Fort Hood also operates a bioremediation site that requires monitoring.

Devices demonstrated at Fort Hood included data loggers and a moisture probe from REOTEMP. In addition, the NDCEE evaluated wireless, radio frequency (RF) temperature monitoring probes; a handheld probe that monitors both oxygen levels and temperature; and three generations of moisture probes from Green Mountain Technologies, Inc. (GMT). At
Fort Lewis, after initial evaluation of many of these technologies, stakeholders narrowed their interest to the wireless technologies. As a result, the demonstration/validation test focused on the GMT wireless temperature monitoring system. 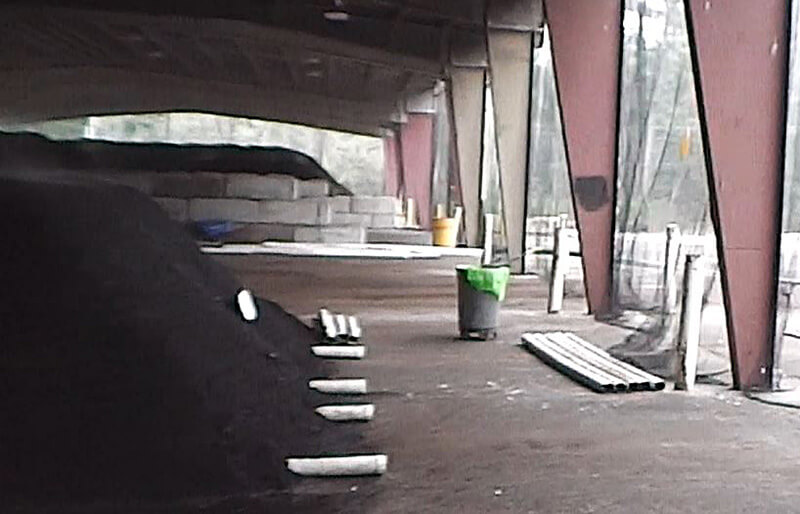 The GMT wireless monitoring temperature devices consist of a robust, two-handled sampling probe that uses Bluetooth™ wireless connectivity to send information directly to a base unit and a desktop personal computer. The GMT handheld field sampling probe is used with an armored iPAQ Pocket Personal Computer that automatically stores temperature, oxygen, and moisture sample readings taken in the field. With both the wireless and the handheld probes, the data are downloaded directly to the Windrow Manager™ desktop software. In the case of both the REOTEMP and GMT dataloggers, temperature data are collected continually by the logger, which is periodically removed from the pile and carried to a computer to download temperature data into the GMT Compost Lab software.

Economic Analysis
The compost monitoring technologies not only reduce labor time but allow DoD facilities to optimize the composting process and take advantage of the beneficial uses of compost such as landscaping and erosion control. Effective composting will also reduce solid waste streams and reduce solid waste disposal costs.

Suggested Implementation Applications
Composting should be implemented or strongly considered throughout the DoD because many DoD installations generate extensive compostable solid waste as part of their daily operations. Therefore, the results of testing conducted under the task, and the identification of one or more technology solutions for improved composting operations, would have widespread applicability across the DoD, other government agencies, and commercial operations.