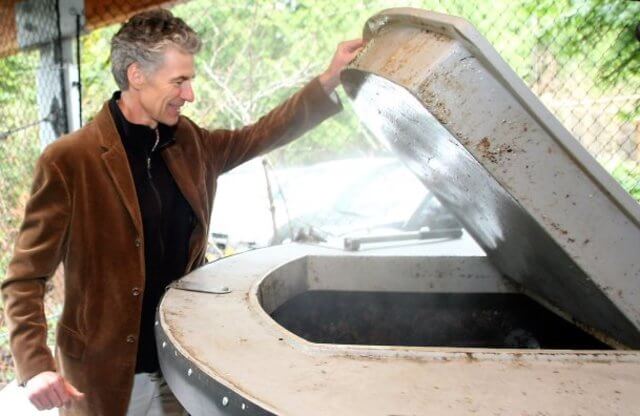 From the Kitsap Sun: Bainbridge company offers composting on a large scale

BAINBRIDGE ISLAND – Opening the lid on one of IslandWood’s massive composting tubs is a little like peering into the belly of a giant.

Steam billows out of the of the hatch, accompanied by a sweet, musty odor. Inside, heaps of orange peels, carrot tops and paper cups are being digested by microscopic bacteria at a fiery pace. Stick a thermometer into the center of the organic mass and it will read a temperature of about 150 degrees.

IslandWood chef Jim White enjoys prying open the tubs for visiting students, showing them how food scraps from their lunch plates are processed into fertilizer for the nearby garden beds.

“It’s a very dramatic reveal for the kids,” said White, who manages the kitchen at the Bainbridge outdoor education center. “You pop the lid off and there’s life going on in there. It’s a living, breathing thing.”

Green Mountain donated two Earth Tubs to the education center as a charitable gift and part of a savvy marketing strategy. Educating the public about the benefits of composting is good for business and lately interest has soared, said company founder and President Michael Bryan-Brown.

“Now people are expecting and demanding to have composting available,” Bryan-Brown said. “People don’t feel it’s OK to throw their food scraps into the garbage anymore.”

Growing awareness of composting translates into higher sales for Green Mountain. The company did $1.3 million in business in 2012, doubling its total from 2011. Bryan-Brown hopes to double sales again this year.

Green Mountain has had its lean years, too. Bryan-Brown founded the company in 1992 in Vermont. He operated from the East Coast for a decade before his wife convinced him to relocate to her hometown of Bainbridge Island. Bryan-Brown said interest in composting has risen and fallen in waves over the years, often reflecting the political climate.

“The Bush years were not good years,” he said.

Now, he believes he’s seeing a mainstream shift toward composting, with more universities, cities and military bases inquiring about equipment. Green Mountain recently helped Portland, Ore., implement a composting system capable of processing hundreds of thousands of tons of matter a year from the city’s curbside compost pickup service. The company also provided a composting center for Joint Base Lewis-McChord.

Green Mountain scales technology to fit customers. On the small end is the Earth Tub, which holds up to 4,000 pounds of compostables and sells for about $10,000. A rotating auger blade inside the container shreds and mixes material. The tub composts a full load of food waste in about four weeks.

On the large end are open, industrial-sized compost piles that might cover several acres. Some are built on concrete pads equipped with aeration systems, “like an air hockey table,” Bryan-Brown said. The air vents allow operators to control temperatures within the piles and keep the aerobic bacteria working productively.

Because it courts large corporate clients, Green Mountain isn’t particularly well known locally, something Bryan-Brown said he wants to change. The company recently joined the Bainbridge Island Chamber of Commerce, and Bryan-Brown said he is looking for Kitsap County projects to tackle.

“We want to be more involved in composting here and now,” he said. [Kitsap Sun]