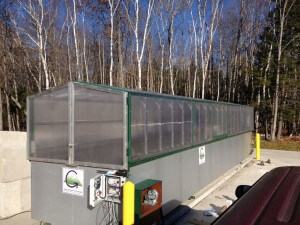 The University of Maine in Orono, Maine generates around 450 tons of food waste per year. The University was spending $65,000 per year for off-site composting. To decrease this high cost and to also bring hands-on educational opportunities to the campus, the University pursued on-campus composting. Green Mountain Technologies’ Earth Flow In-Vessel (EF-40) met all of UMaine’s composting requirements:

GMT provided UMaine with a 40-foot Earth Flow In-Vessel Composting System (EF-40) which is saving the University net $32k per year. The system cost was $152k, and the school will fully recoup their investment in 4.75 years.

The University of Maine uses the EF-40 to compost nearly 1-1½ tons of food waste and animal bedding per day. The University is using the rich soil amendment for landscaping and university crop fields. The compost also supplies the new greenhouse located next to the compost facility, where students in UMaine Department of Plant, Soil, and Environmental Sciences are growing edible greens to supply the dining commons. The student-run greenhouse and compost facility are expected to be an educational resource for UMaine students and community groups alike.

“This will allow us to close the loop, not only composting on campus, but producing a product that is used on campus,” says Dan Sturrup, Executive Director of Auxiliary Services. “At UMaine, we’ll go from plate to plant. And, with the help of the greenhouse, back to the plate again.”

According to Misa Saros, UMaine’s conservation and energy compliance specialist, the composting system is in keeping with UMaine leadership and commitment to sustainability- from its sustainable agriculture minor to its campus-wide green initiatives, all of which have earned the University a citation in Princeton Review’s Guide to 322 Green Colleges for four consecutive years.

“We are very excited to be implementing a system that makes productive use of a valuable resource that is often too discarded in landfills or incinerators,” says Saros.

When UMaine first installed their Earth Flow, operations personnel removed their first batch of compost 23 days after system launch. There was no smell in the product, no observable food waste and good moisture content. The discharged material was still at 120°F.

As the first facility for advanced composting of food in Maine, the University frequently gives tours to interested parties. UMaine’s Dan Sturrup reflects on his experience working with GMT, “This is actually what I was hoping for in the relationship. And the end product is awesome.”