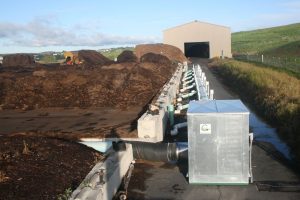 Green Mountain Technologies installed a 12,000 ton per year Aerated Static Pile (ASP) composting system for Washington State University (WSU) in 2007. The facility takes in agricultural waste from the research farms and food waste from the campus. The finished compost is used for sterile bedding and landscaping.

After eight years of successful composting with their ASP system, the school decided to expand their operation to accommodate an increase in capacity and to also add a zone exclusively for mortality composting. 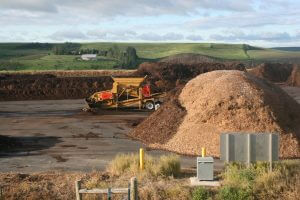 GMT expanded the existing ASP manifold and control system to the existing 90’x120’ ASP pad. This addition helped to reduce odors and expand capacity for their existing windrow operation. The pad is divided into 8 zones, each 15×90’ with 300 cubic yards of compost on each zone. 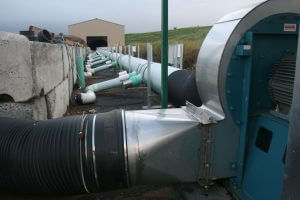 The ASP process requires no turning and less land area than windrows. The feedstocks are blended in a stationary mixer and water added to create a compostable mix prior to loading on the ASP pad. Then the material is stacked on top of perforated pipe sucks air down through the pile to maintain aerobic conditions and blown through a biofilter to minimize odors. A computer controller regulates airflow and temperature. The equipment cost of the entire ASP system was less than $200,000 and was installed in 3 days. 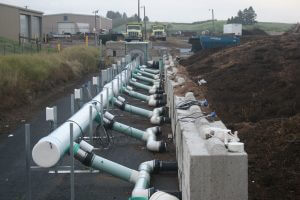