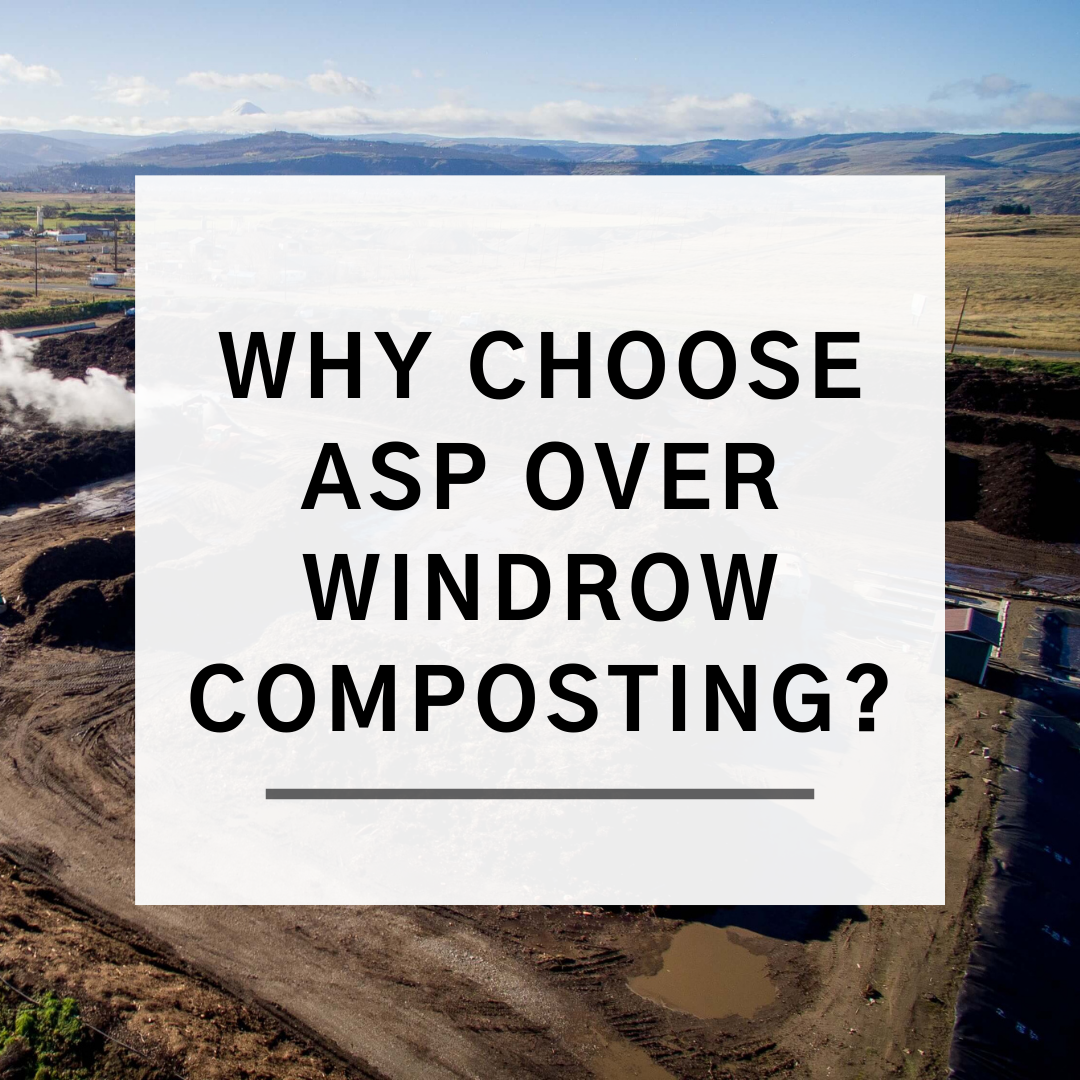 In the US, windrow systems are the most popular form of industrial composting. And it’s no secret why. Windrows have relatively low start-up cost. In fact, for small to moderate sized compost operations, all you need is a front-end loader or a turner and a truck to start composting.

And while windrow is a great way to start composting, it’s just that: a starting point. Whether you’re ready to scale up or maximize your efficiency, an aerated static pile (ASP) is the best choice when you’re looking to upgrade from a windrow.

So, What is the difference between Windrow and ASP?

As anyone who compost knows, nothing is more important than oxygen. So when we’re discussing the differences between windrow and ASP, it all comes down to how the compost gets its O2.

And that’s it! While this small change might not seem like a lot, it makes a big difference in how you compost.

Why Should I Upgrade to ASP?

While windrow works fine for many people, there are several ways that ASP has windrow beat.

At its best, a windrow takes 90 days to create a finished product. However, many windrow systems take much longer than that. Some systems take as long as a year.

In comparison, ASP’s are much faster. A properly managed ASP can create high-quality compost in as little as 45 days.

At Green Mountain Technologies, we hear the same complaint about windrows time and time again: THEY STINK!

But isn’t that just the nature of the beast? After all, doesn’t all compost smells?

With an ASP, you can apply a finished layer of compost or wood chips over the pile. This can reduce odors by up to 90%. And stink free compost isn’t just good for you, it’s good for your neighbors. Because of the smell, many communities regulate windrows locations. However, ASP’s have far fewer restrictions.

Windrow systems need to be put out to pasture. Literally. They stink and take up large amounts of space, making them most suitable for isolated pastures and fields.

With windrows, you are constantly turning and moving the piles. This means you need a lot more space to work with. Also, the height of the pile is restricted based on the type of equipment you have to turn it.

ASP’s however, require 75% less space than most windrow operations. That’s a lot of saved space that can increase your composting production.

Going From a Windrow to ASP System

Transitioning from a windrow to ASP isn’t as daunting as it seems. In fact, many people start with a slow transition by starting with an ASP/windrow hybrid. With this solution, you simply add aeration in front of your existing windrow piles, cutting processing time in half.

At Green Mountain Technologies, we’re big fans of upgrading to ASP systems. Each site is different, so there is no one right way for converting to ASP. That’s why we create a custom solution for each customer.

If you’re interested in learning more about turning your Windrow into an ASP, give contact us at sales@compostingtechnology.com and one of our engineers will be more than happy to discuss the best composting solution for your site.